It's Not Mine: Oris ProPilot Altimeter 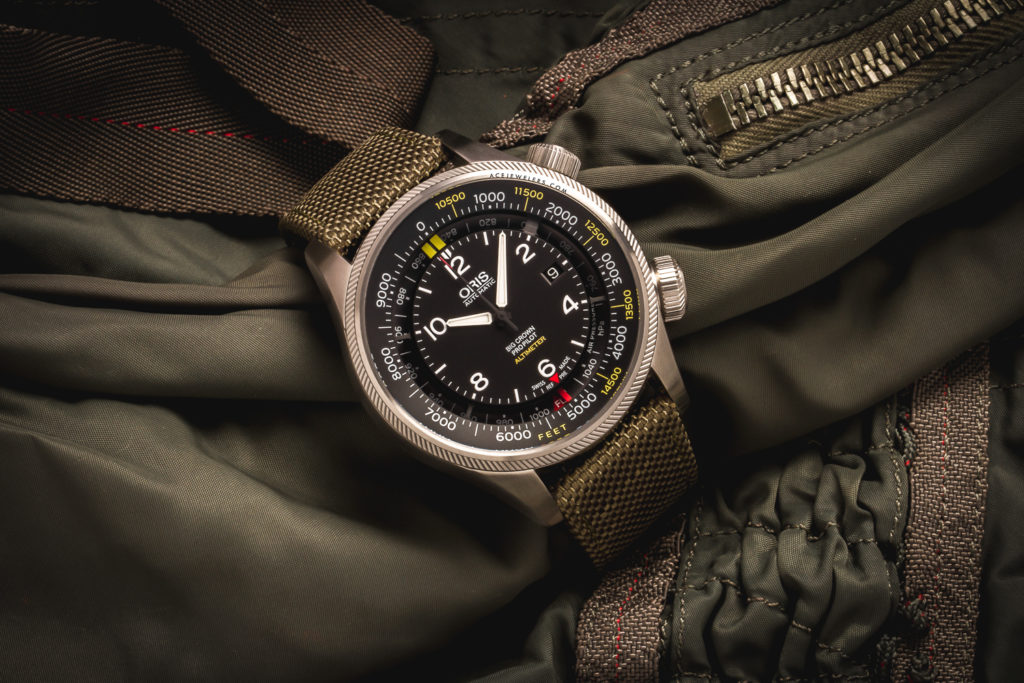 After my two weeks with the decisively classic Frederique Constant Flyback, I thought it'd be fun to go with something different for my next post in our It's Not Mine review series. To the rescue came Gijs van Hoorn of Oris the Netherlands, who was kind enough to lend me one of the brand's most distinctive watches: the Oris ProPilot Altimeter.

Oris first dabbled into the world of physics with the 2013 Acquis Depth Gauge, a diving watch that allows water to enter a channel through a hole in its sapphire glass. When diving, the air left in said channel gets compressed by the pressure of the water. The current depth is then indicated on a yellow scale by the line that separates the water from the air. Simple right?

The following year Oris went in quite the opposite direction with the ProPilot Altimeter, a watch meant for the open skies rather than the deep blue. Accordingly, it features technology to measure atmospheric pressure rather than water pressure, and it displays the height above a pre-set standard rather than the depth submerged. To achieve this Oris sought the help of Thommen Aircraft Equipment, which devised the mechanical altimeter that's fitted below the self-winding movement. Essentially a miniature aneroid barometer, it features a stack of sealed capsules with vacuum inside. These capsules compress as atmospheric pressure increases -on descend- and expand as atmospheric pressure decreases - on ascend. These cells in turn are connected to a hand through a set of levers and gears. The altimeter is activated by unscrewing the crown at 4:00 until it pops out and the red ring appears. Not that complicated either right?

However, the correlation between the atmospheric pressure and the altitude is not set in stone but rather dependent on various parameters such as weather dynamics and temperature. As such an altimeter based on this principle must have a way to calibrate its display. On the ProPilot Altimeter this is done through a variation of the Kollsman Window: before embarking on (e.g.) a climb, a base line has to be set. To do this, the crown at 4:00 has to be pulled out and by rotating it either the yellow triangle can be set to the known altitude, or the red triangle to the reference air pressure. Now you're good to go.

As indicated above the altimeter is fitted below a self-winding movement. This is a world's first. It was explained to me that this had not been done before as it was thought to be to hard -if not impossible- to get the information given by the altimeter to the dial as the rotor would not allow this. Oris litteraly went around this by using a hand that curves around the movement. While it is still not on the same level as the hour, minute and second hand, the triangles on both end are not as deep as the construction would suggest. The movement itself is secured through four arms, one of which cleverly hides the stem - allowing ample room for the altimeter hands to be seen and read.

Let's get one thing out of the way: this is a big watch. The diameter is listed as 47mm, with a height of about 18mm and lug-to-lug of 56mm. It's big, it's bulky, and most certainly not for the faint of wrist. However, when the strap is sized properly it wears well. You'll notice it's there 100% of the time but it's not uncomfortable. The position of the crowns plays a big role, as it prevents them from digging into the wrist. 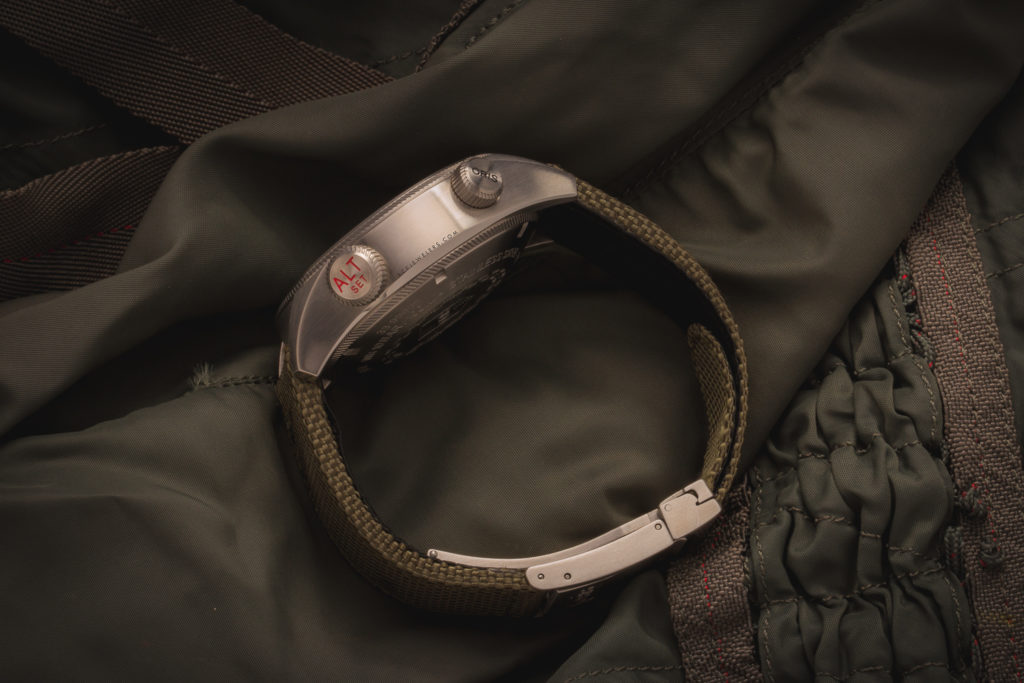 At first the case shape seems simple but upon a closer look it is full of nifty little touches that make for a coherent and well-designed whole. A particularly eye-catching feature is the turbine'eque grooving found on the bezel, which is replicated on both crowns as well as on the case back. It adds a lot of character without being overpowering. In the -crowded- market for pilot's watches I think Oris is onto something here, with a look that's unique without reverting to gimmicky touches. It's also very much not vintage-inspired.

There are two other details that I'd like to point out. First, it's as if the bezel is placed into the case instead of atop it; at their attachment to the case the lugs are raised to cover the side of the bezel. Was that unclear? I hope not, but otherwise I'm sure this side view by Oris shows what I'm talking about:

Second is the slot engraved to make room for the strap on the lower part of both the 12:00 and 6:00 sides of the case. Through this Oris was able to keep the lugs short and have the strap visually hug the case, while still allowing the strap to move freely. While most certainly not unique to Oris it's still a clever idea.

In this particular version the ProPilot Altimeter is strapped to the wrist by means of a green textile strap. It's fairly thick at the attachement to the case, but slims down noticeably towards the clasp. The latter is a proprietary folding clasp which is meant to both look and operate as if it were taken from a jet cockpit - cool. It does only take Oris straps though. I also wish it had some kind of fine adjustment. A big watch like this must not move around too much and be fitted to the wrist at the right size. This means it can get tight when -for example- curling 40 pounders or while baking on a beach (now I'm just day dreaming), which is when a few extra mm's can make all the difference.

Furthermore, the lug width is 23mm, something I only came to realize when I wanted to fit an aftermarket rubber strap as to prevent excessive wear and scratches on the buckle of this loaner. I honestly wish manufacturers would just stop this nonsense. I want to mess around with NATO straps, with rubber straps, in fact with whatever strap I want - and you guys are spoiling all the fun with these odd sizes.

I'd like to make a few more remarks about the size to finish off this segment, as there's a lot to be said about large watches, their movement sizes, and the message they convey. With the ProPilot the movement is 25.6mm and the case is 47mm. This generally is a very, very bad ratio, to which I would most certainly object. But not here. The movement is the right size for the dial while leaving room for the altimeter. It makes sense. Would it be possible to make the ProPilot Altimeter in a smaller size? I suppose so. Would it work equally well in terms of general feel, functionality, and readability? I'm not sure. 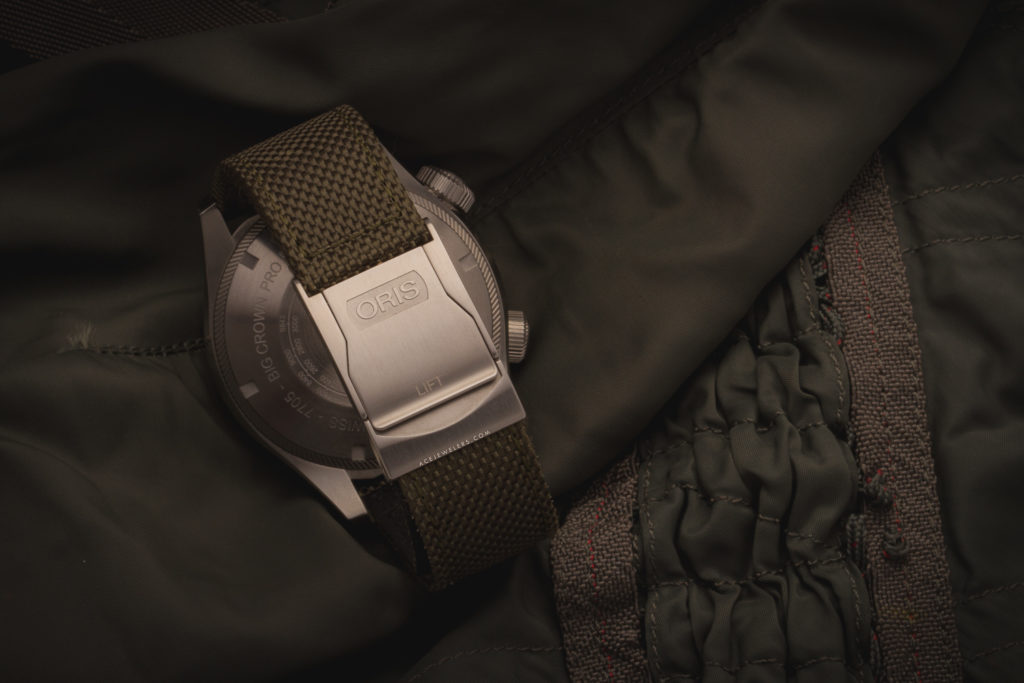 The Oris ProPilot Altimeter has a lot going for it. It's got a cool and rare complication that's 100% in sync with the aviation theme. It's got a look of its own. And it's priced very competitively. I quite liked it although I'm not usually one for large(r) watches, and I must admit it made me look for near mountains to climb and try out the altimeter. Turns out we don't have any in the Netherlands. Who knew...

The Oris ProPilot Altimeter is available in our eBoutique. There are several other cool watches in the Aviation collection.

~Dale Vito
Watches & It's Not Mine
December 9 2017
Search
Categories